We invite you and your friends to join us at the forthcoming free concerts.

Looking back to October 2015 Concert… The final concert of the 2015 season came to an end with a magnificent performance of Tchaikovsky’s Pathetique Symphony, a performance which Franco Viganoni, our recording engineer, thought was one of the best he had heard from the AYO. He has made a wonderful recording of the concert, which also includes a sparkling performance from Maria Mo of Mendelssohn’s first piano concerto.
As I listened to the young musicians performing with a maturity well beyond their years, and worthy of a professional orchestra, I thought with amazement just how far they had come in the course of one year. It reinforced my belief that playing in an orchestra like AYO is of immense importance in their development.

Of course the standards of teaching have risen greatly over the last twenty to thirty years, and the average technical level is much higher than it was then. The contribution made by the universities’ Schools of Music have also been a major factor in raising performance standards. However without the opportunity of performing together before the public, developing the listening, reading, and ensemble skills which playing in an orchestra provides, a vital element in the young musician’s musical education is missing.

In my experience of listening on audition panels to applicants for positions in a professional orchestra, I found that almost without exception those auditioning would play their chosen concerto with great aplomb and technical proficiency, which is not surprising as they had probably been studying it with their teacher for an extensive period, but when they came to the prepared excerpts from the orchestra repertoire they would show that they had had very little experience of playing in an orchestra. They often demonstrated not only little knowledge of the different styles required by different composers, but also of orchestral techniques, like the delicate accompanying figures required by composers like Mozart, and the sustained pianissimo legatos so often found in orchestral scores. Many in fact were quite unable to produce an orchestral pianissimo at all, having been trained exclusively to think of themselves as soloists.

I was very surprised to learn recently that some otherwise excellent teachers discourage, or even forbid their students to play in the AYO, believing that doing so is bad for their playing. The excellent concerto performances given by AYO members in recent years quite clearly demonstrate that this is not the case. In denying their students the musical and social opportunities provided by the orchestra, I believe these teachers are doing their students a disservice. 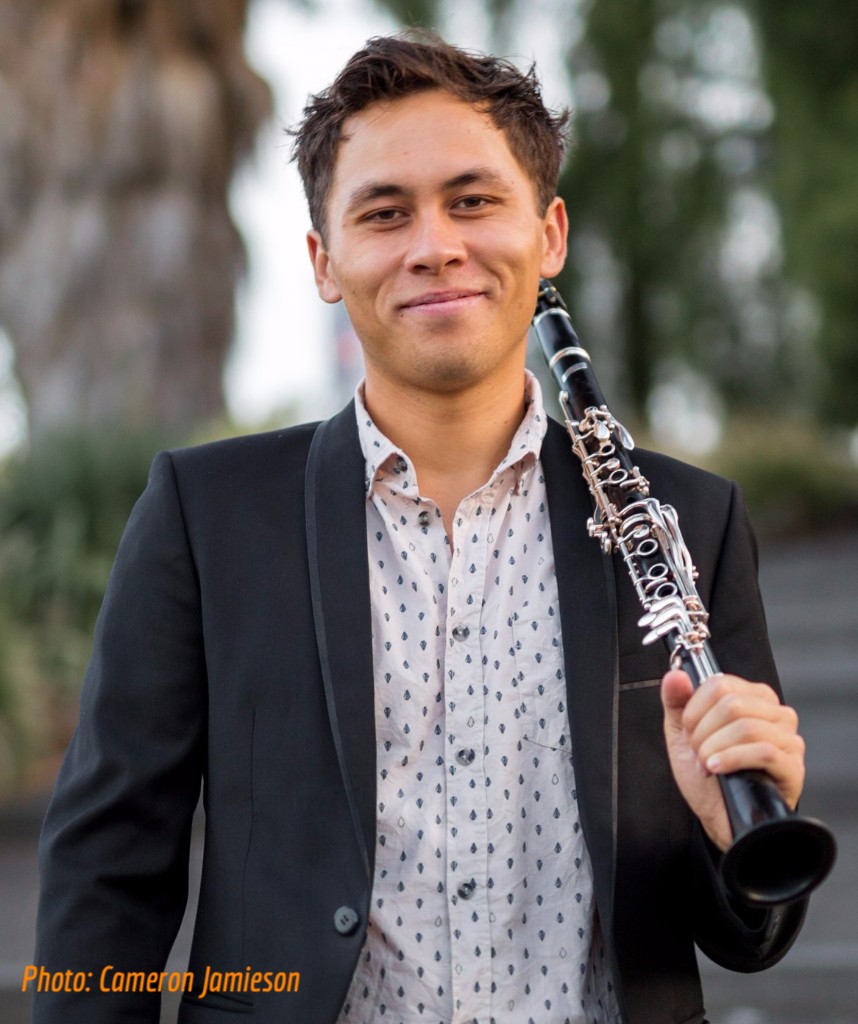 The concerto in this concert will be Louis Spohr’s first clarinet concerto, which will be performed by Kenny Keppel, a former first clarinet of AYO, who has been undertaking post-graduate study in Melbourne. We are very pleased to welcome him back to AYO, this time as soloist.
Spohr was a contemporary of Beethoven and, in his own day, regarded as his equal as a composer. He composed ten symphonies, eleven operas, and four oratorios, as well as much chamber music.He was also one of the foremost violinists of his time, and composed eighteen violin concertos as well as four clarinet concertos.
It is his clarinet concertos which are probably most frequently played today, as his style of composition seems to particularly suit the clarinet. They are not only beautifully written for the instrument but combine brilliance and elegance in a very attractive manner.
Kenny is another example of an outstanding talent who has taken full advantage of the opportunities provided by AYO and in the third concert series, in October this year, AYO will feature yet another wonderful wind soloist, the winner of our 2015 Soloists Competition, flutist Eva Ding, who will give the New Zealand premier of the ‘Golden Flute’, a concerto by the award winning American- Chinese composer Chen Yi.

Coming up in this programme…

The first concert of our 2016 season includes two works by composers who became symbols of their countries’ national aspirations, Smetana and Sibelius. The concert will open with Smetana’s wonderful evocation of the river Vltava from its source in the Bohemian mountains, through the Czech countryside to the city of Prague. The German name for the river is Die Moldau, and it is by this title that the work is better known. Sadly, Smetana had become totally deaf by the time he completed the work, and therefore was unable to hear it when it was first performed.

The orchestra will also perform Sibelius’s second symphony, the work which securely established his reputation after the success of his first symphony. It won immediate success from the public, if not the critics, and has remained to this day one of his most popular compositions. It is interesting, and indicative of the suppression of the national cultures, that Sibelius’s first language was Swedish, and he did not learn to speak Finnish until he was a young man. Smetana also had to learn Czech as an adult, his ‘mother tongue’ being German.

Two members of the executive committee have moved on this year. Anne Draffinresigned earlier last season, but very kindly agreed to continue organising the AYO Soloists Competition for us. The competition was really Anne’s creation, and it has been a wonderful addition to the opportunities we can offer players. Cameron Stuart, who has given so much to AYO over the last fifteen years, has also moved on, having taken up an appointment with the Crown Prosecution Service in Napier. We shall miss him very much, as over the years he took on many of the time consuming administrative and management tasks which are so essential for the smooth running of an organisation like AYO. He showed a dedication and love for the orchestra which was quite exceptional, and it has taken some thought to find a way to replace him. Fortunately Joseph Chen, who is a violin and viola player in the orchestra, has agreed to step up to the mark and will take on the role of Manager. Annette Sachtleben who has recently retired from AUT has also agreed to join the Committee, and I am sure she will be a great asset with her administrative and cultural experience. I first knew Annette when she played the cello in the early days of the National Youth Orchestra, and we have for the last few years been playing quartets together. In fact we have now played through all the quartets of Haydn, Mozart, Beethoven, Schubert, Brahms, Dvorak, and several other composers, and at present are working through Shostakovich. I would say this demonstrates an exceptional tolerance of human frailty, as we are still good friends!

The policy of entry by donation for our Auckland Town Hall concerts has been so successful in drawing audiences that we have decided to apply the same principle to our other concerts as well. We are hopeful that the additional audience numbers will bring in enough donations to make up for the loss of ticket sales. It does mean of course that in the smaller venues it will be essential to get there early to ensure a good seat. We are still working on a system which will permit regular supporters to get access to VIP seating by becoming subscribers to the orchestra.Hopefully we will be able to implement this in the course of the year.

So a new year is bringing change to AYO but I feel confident that we will grasp the challenges and continue to thrive as a vibrant organisation dedicated to help develop the musical talents of our young people. 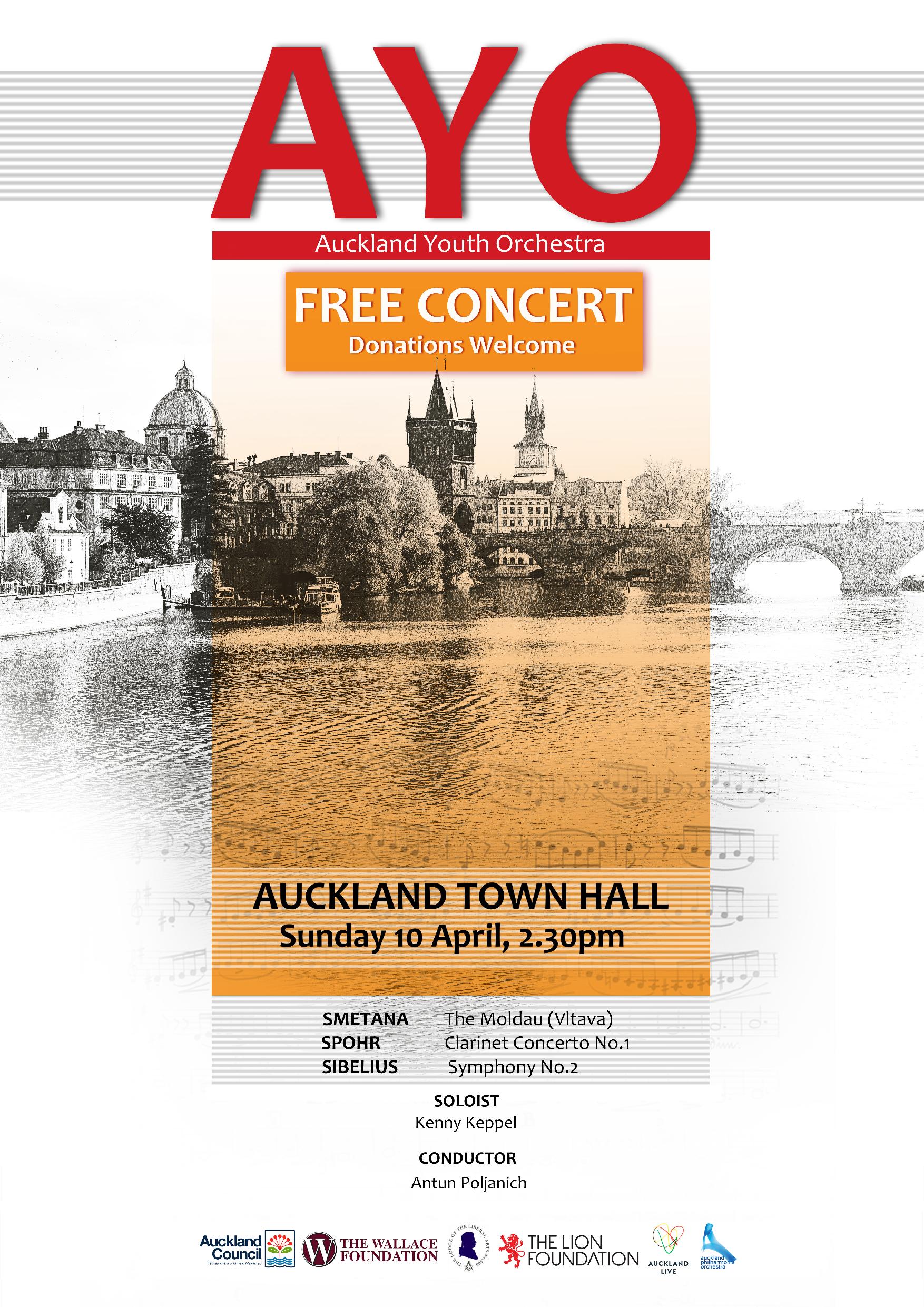