It gives me great pleasure to invite you to attend the
upcoming concerts being presented by AYO.

Looking back to the last concert…
Choosing programmes for our concerts can be a very difficult process. Before each season we cannot always be certain of the final make-up of the orchestra. One year we may be short of trombones for example, or violas, or horns, and each year we lose some of our most experienced and gifted players and there will be no guarantee that they can be replaced by players of similar calibre.

All this has to be taken into account when planning programmes. I was therefore a little apprehensive when Antun Poljanich, AYO’s Music Director, suggested the Symphonie Fantastique by Berlioz as the main work of our third and final programme of 2017.  It is a notoriously difficult symphony to perform, full of sudden changes of tempo and dynamics, exposed solos for the woodwind and virtuoso passages for the strings.

As it turned out I had no need to worry. The orchestra played magnificently and overcame all the manifold traps for young players with total confidence and aplomb. This of course was a result not only of Antun’s skill as a teacher in training and coaching the players, but also his artistic abilities as a conductor.  It is one thing to conduct a professional orchestra which is made up of highly skilled musicians who may have played the music many times, and quite another to begin with a group of talented but inexperienced young musicians, some of whom may not even have played in a large orchestra before, and achieve performances of real artistic and musical value such as this.

We are so lucky to have Antun as our conductor and, as it happens, this year he will be celebrating his 20th year as Music Director. It will also be the 70th anniversary of the foundation of the orchestra.  To mark this very special occasion the orchestra will be visiting Europe, having received an invitation to participate in the Young Euro Classic Festival in Berlin. 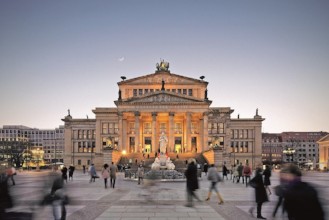 They will be performing in the prestigious Berlin Konzerthaus alongside other youth orchestras from around the world. It is a great honour to be invited and shows that the reputation of the AYO has reached beyond the shores of New Zealand.

The orchestra will also be visiting other European cities including Vienna, Dobrna in Slovenia, Prague, Dresden, Tubingen and Frankfurt. It will an experience that the players will never forget.

Obviously, providing transport, meals and accommodation for an orchestra is a very expensiv

e business, and though the players themselves will have to meet many of the costs, we aim to cover all expenses without having to go into our reserves if possible. If any of you would like to contribute to this wonderful project in any way, please get in touch with our Treasurer, Helen Lewis, at treasurer@ayo.org.nz .  All contributions will be gratefully received.

Before I move on to the first programme of our 2018 season I must also mention that the orchestra not only opened the last concert of 2017 with a stunning performance of Beethoven’s Egmont Overture but also gave the world premiere of John Wells’ second organ concerto, magnificently played by Rebecca Lee. This imaginative and attractive work, specially written to exploit the huge range of the Auckland Town Hall organ, was very well received by the audience; organists looking for a concerto to add to the restricted repertoire of organ concertos should look no further. I hope it has all the success it deserves.

Our forthcoming concerts…
Our first programme this year will feature Edward Grieg’s Peer Gynt suite and Carl Nielsen’s flute concerto, with Anna Cooper, the winner of the AYO 2017 Soloist Competition, as soloist.

Originally from Gisborne, Anna completed a Bachelor of Music (1st Class Honours)  and Bachelor of Arts (Politics and International Relations) at the University of Auckland. In 2017, she completed a Fellowship with the NZSO and Internship with APO. She is twice a past member of the National Youth Orchestra, and was principal flute of the AYO for the last two years.

Anna has been the winner of the University of Auckland Graduation Gala Concerto Competition, and was awarded the Woodwind Prize at the Gisborne International Music Competition in 2015.

Nielsen, like Elgar in his Enigma Variations, delighted in portraying the characters and personalities of his friends in music.  The flute concerto is a picture of Holger Gilbert-Jespersen, the flautist of the Copenhagen Wind Quintet.  Nielsen also wrote himself into the work in the form of a bass trombone which is probably the antithesis of the aristocratic flute. Though revered in his native land as Denmark’s greatest composer, his music is not particularly well known here in New Zealand, and this opportunity to hear one of his finest compositions should not be missed.

The Peer Gynt suite, of course, is a wonderful introduction to classical music for young people who may not have had much experience of symphonic music, and the third work in the programme, Schubert’s Unfinished Symphony, is both instantly accessible and yet full of the deepest emotion.

Unfortunately we have not been able to obtain a date for a Town Hall concert for this programme, but four performances will take place at different venues around Auckland (details at the head of this newsletter). Because the venues are smaller we are unable to extend our free entry for these concerts, except of course for our Supporters and Sponsors.

Free entry will again be in place for the two Town Hall concerts later in the year.

I look forward to seeing many of you at our March concerts.